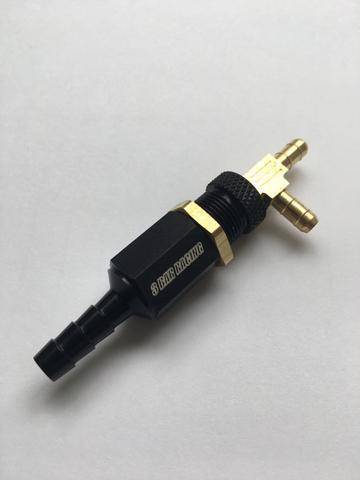 Controls boost spikes and maintains EGTs (Exhaust Gas Temperatures) by providing a constant boost pressure. The new MKII is an improvement over the original Dawes Device and includes a stronger spring for higher boost, with a stainless steel ball, in a smaller package. Performance is the same as the original (other than ability to reach a higher pressure)

Adds a synthetic, low mass ball, in place of the stainless steel ball. This improves the reaction time of the mechanism and reduces boost fluctuations in extreme off road conditions. The lower mass ball maintains contact with the ball seat, even if the vehicle is jarred.

Note: As of November 20th, 2016, we have discontinued our "standard" model and all boost controllers sold by 3 Bar Racing and Dawes Devices will now be our Hybrid model. We have reduced the price on the Hybrid and so, it no longer makes sense to compromise ANY performance for a couple bucks in perceived savings.

The TDI Boost Controller was developed, based upon input from the TDI Club (www.tdiclub.com) . At this time, Dawes Devices does not have access to a TDI vehicle for development purposes and cannot provide detailed instructions for installation.

The following is meant as a guideline, but for specific questions we refer you to the TDI Club website (search for posts with "Dawes" in the subject line). We are grateful for any contributions you can offer to improve the instruction set for other TDI owners. The following was posted by "GoFaster" at the TDI Club:

There are 2 different systems in use, depending on the vehicle model;

Older models ('96 - '97 Passat TDI which is called B4 body style, '97 - early '99 Jetta TDI which is called A3 body style), have a wastegate-type turbocharger with a red hose coming from the turbo compressor outlet and a blue hose returning to the wastegate housing. These meet at a solenoid which is called the N75 valve. For these cars, you cut the blue and red hoses at a convenient place - some cars have an existing connector that can be pulled apart to eliminate cutting the hoses - and install T fittings there. The dawes goes with its inlet side T'd to the red hose and the outlet side T'd to the blue hose. For this installation, it would be nice to have two T hose fittings and the short pieces of interconnecting small diameter hose, and maybe a few clamps. I have forgotten what size the hose is, maybe someone else can fill this in. The required opening pressure for the valve is in the 15 - 16 psi range. The N75 valve stays in the system to keep the car's computer happy.

Later models, referred to as A4-chassis (all New Beetles, and Golf/Jetta TDI after '99.5) have a vacuum-operated turbo controller. On these, vacuum is applied all the time (e.g. at idle) and at higher boost pressure, the N75 solenoid valve (or the Dawes) breaks the vacuum so as to open up the vanes in the VNT mechanism. The "sense" of pressure change is the same as with the conventional wastegate, which is what allows the device to work.

On these, you have to drill and tap one of the intercooler pipes for a fitting. The closer to the turbo, the better (shorter hoses = faster response). Hose goes from there to the Dawes inlet, then hose from the Dawes outlet to a T-fitting that you splice into the hose leading to the VNT vacuum diaphragm on the turbo. On these, you need a couple pieces of hose, the fitting to be tapped into the boost pipe, and the T-fitting for the VNT turbo control hose. 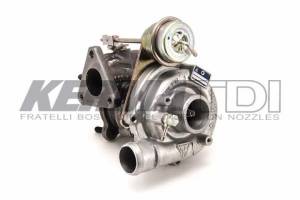 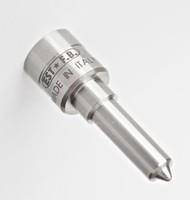