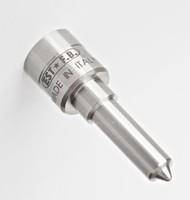 Direct replacement for the "T4-150hp" Nozzle but with DLC Coatings

ULSD(Ultra Low Sulfur Diesel) RatedNozzles
ULSD aka "Ultra Low Sulfur Diesel" has brought about anew set of challenges to theDiesel Injection Systems industry. ULSD specifications more specifically "ASTM-975 1.1.4- S15".
ULSD Rated Nozzles are unique in that they areliterally built around anultra-hard "Diamond Like Carbon" coating aka "DLC". DLC provide a 'Diamond like' surface with superior surface qualities in respect to smoothness and uniformity that greatly reduce sliding friction. This allows the nozzle's needle to cycle faster, withimproved fuel quantity control thru better needle response.
Another key benefit of DLC is that it results in a 50% or more increase in component life when compared to a non-DLC nozzle type running ASTM 975 USLD fuel. A nozzle is comprised of twoprecision made pieces, ahigh nickel alloynozzleanda high carbon steel needle. Anon-ULSD Rated nozzle suffers from the effects of reduced lubricity as a result of the loosely controlled lubricity specifications underASTM 975. Because of this there is a wide range of actual fuel qualityfrom one retailer to another.
Unfortunately, wear is greatly increased due to reduced lubricity on theinternal sliding surfaces. More specifically,ULSD fuelincreases the wear rates in the needle support regions which over time (3,000-4,000 running hours) leads to decreased nozzle performance. As wear increases, the gap between the needle and nozzle widens and fuel (pressure and volume)leaks backinto the injector and power and efficiencyare lost due to poor pressure response of the injector nozzle.
DLC increases the hardness of the needles sliding surfaces thus increasing its service life by reducing the sliding friction and increasing the hydrodynamic support that the needle utilizes to remain centered in the nozzle bore.

ULSD nozzles carry a small premium over the non-DLC types butwith nearly double the service life (or more) of the nozzle your direct savingsare realized notonly thru greater durability but improved function of the nozzle meaning better fuel economy and lower emissions all of which translate into greater longevity of your diesel engine.

ULSD Rated Nozzle
DLC (Diamond Like Carbon) coatings cover all of the internal needles sliding surfaces. The lower portion is not coated since this is a direct contact surface that requires a normal wear characteristic to generate the high pressure seal needed during pressure build up prior to and afterinjection.
DLC Coatings at the Nanometer level

The key advantage to a DLC coating is the superior sliding surface it creates between two moving parts. This allows significant reductions in friction, andfar greaterdurabiltiy due to reduced reliance on thelubricity of the fuel.

A standard needle is uncoated and relies on the end result of the precision machining. This leaves very slight imperfections in the surfaces that increase the reliance on the fuel to prevent wear. Also this slightly increases the friction and thus lowers the response timeof the needle consequently lowering its overall efficiency. 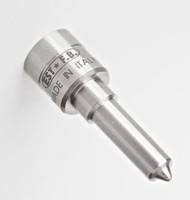