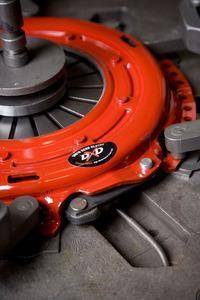 Another Kerma innovation, in our long tradition of pioneering TDI performance. The venerable "quiet" clutches were an icon in the TDI world for years, but they do rattle to some degree at idle. It was "the price" of having a lot of torque in our TDI.  No more!  The older "quiet" clutches are superceded by this completely new design, making rattling clutches a compromise of the past.

This is a new revision direct from South Bend with a new friction plate design released March 15, 2012 --

This product fits the following vehicles

European and other applications please call us!

Engineered for HP modifications.  This Heavy Duty Pressure Plate has an increased clamp load with little or no increase in pedal pressure. The Organic disc material has a high metal content that increases the co-efficient of friction by two times over a stock lining and increases rotational strength up to a 12,000 RPM burst point. This clutch system maintains a stock feel while offering strength and durability.

This is South Bend's Stage 2 Daily driver kit for VWs. It replaces the OE dual mass flywheel with a SBC single mass flywheel  22lb flywheel This clutch has a heavy duty pressure plate that allows increased clamping with little or no increase in pedal pressure. The organic disc material has a high metal content that more than doubles the drag coefficient while maintaining stock feel and durability.

This kit will easily support 330 ft/lbs of torque, and will fully meet the needs of all but the most highly modified TDIs.

The kit includes pressure plate, clutch disc, throw-out bearing, bolts, and alignment tool. The flywheels are made by SBC for this kit, providing very smooth performance. 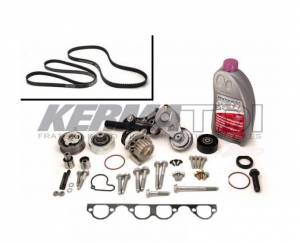