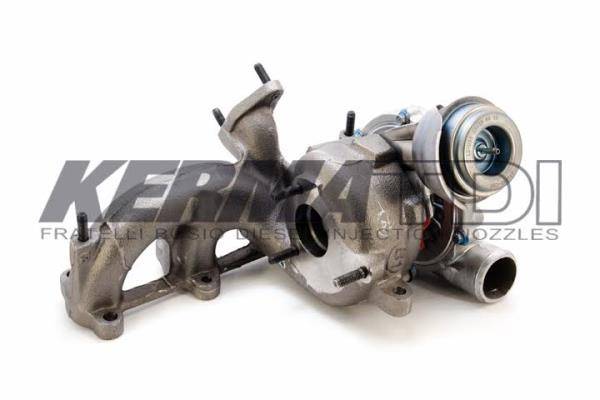 CURRENTLY OUT OF STOCK. DISCONTINUED FROM GARRETT BUT WE ARE WORKING ON OTHER OPTIONS and HERE IT IS!!

This turbo has proven quite popular, because it has all the goodness of the fast-spooling factory turbos with a compressor supporting higher airflow, with few tradeoffs for street use. Plus, it will generally bolt right up to a stock ALH or BEW engine in place of the original vnt15 or kp-39, with minimal adaptation on the compressor inlet and outlet. The stock Mark IV TDI exhausts bolt right in place for easy installation, and all of our upgraded exhaust products like our 3 inch turbo back system integrate seamlessly.

The 17/22 hybrid adds a larger 52mm compressor wheel and housing to the venerable VNT17 (1749VB) hot side. The compressor supports higher flow rates at high RPM compared with the original turbo and vnt-1749VB, which allows somewhat extended high-rpm performance. Also, since the compressor maps max efficiency island is positioned right where a 1.9 liter TDI experiences typical highway cruising conditions, less exhaust pressure is needed to power this turbo at highway speeds. This leads to improved highway fuel economy in many cases.

Although they are satisfactory in an otherwise stock car with no other performance modifications, these turbos will perform best if your TDI has upgraded injectors and ECU tuning from KERMA. We can also adjust the ecu to allow using the ALH version in a BEW without the check engine light thats usually triggered by the missing G500 actuator position sensor if needed. An upgraded exhaust helps the turbine spool faster, and freeing up the intake tract with our OMI intake pipe and an AFE intake filter makes things a lot easier for the compressor, especially at lower engine speeds and higher boost (higher pressure ratios.) Besides that, an upgraded intake and exhaust really sound cool!

One of the best combinations weve tested includes this turbo, with a Colt Cam (stage 2 ALH cam, Stage 2 BEW cam), PP764 or bigger injectors (stock injectors or PD150 injectors BEW) and the 3-inch turbo-back exhaust, and an OMI intake. This really hits the hardware sweet spot, with the cam and exhaust helping the low-end response of the bigger turbo while reducing the compressor noise at higher boost levels. While these turbos also work well in cars that are otherwise completely stock, the airflow add-ons really compliment the larger compressor!

As with the 1749VB, a 3-bar map sensor will enable full use of the turbos available range with the proper ecu tuning, for long service life.

For the ALH engine our OMI and SMIC lower plumbing will ease these fitment issues and provide more airflow.

This turbo is composed entirely of new Garrett components, and is assembled by a leading Garrett Distributor.

A note to early ALH owners: This turbo shares the mounting system of the latest version of the VNT 15. If your car was produced before mid-2001, the turbo support bracket, oil return line, and oil return line block fitting will have to be replaced with the updated version of these parts. If your ALH was produced after mid-2001, the oil piping and turbo bracket are unchanged. We offer a retrofit kit to help in this endeavor.